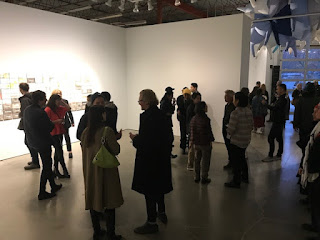 Khan Lee's Lost and Found exhibition opened at Equinox yesterday afternoon. A great turn out, with gallery artists and those much younger (some as young as forty!).

In 1998 Lee and a couple of fellow Emily Carr University students began a relational artist collective called Intermission, whose project in part was the inverse of the conceptual project that had arrived in Vancouver in the late-Sixties and later "posted-" itself to photography and, in some cases, sculpture. Instead of artists who thought up ideas and had others make the work, Intermission advertised itself as makers available to those willing to contribute ideas. At least that's how I interpret it.

Though Intermission was an early example of the more recent social practice that has come to characterize 21st century contemporary art (so far), Lee was always a formalist, and this bears out in his current exhibition (one work, entitled Intermission, 2022, is comprised of 144 4.5x8" water colour "backgrounds" derived from de-peopled Zoom grids). But the crowd pleaser -- the work that, in the words of The Big Lebowski's "The Dude", "really tied the room together" -- is Fifty Feet (2002/2022) -- a 50ft. stretch of super-8 reversal film placed before an LED light strip inset into the gallery's south wall.

Here are those first few feet: 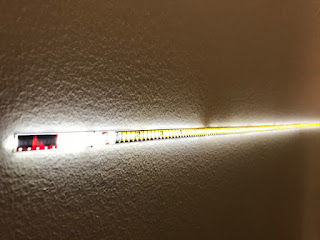 Posted by Michael Turner at 8:52 AM