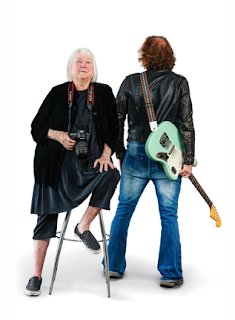 Another picture has been added to photographer-artist Dina Goldstein's OG Punk exhibition since I saw it the day before its official opening (see my previous post). The picture (above) is a double portrait of punk chronicler Bev Davies and her son Keif, whose childhood self appears on the cover of DOA's 1985 album Let's Wreck the Party. In the meantime, I have produced a first draft script to be read and recorded for the exhibition podcast.

OG Punk is an exhibition of sixteen recent pictures by the artist-photographer Dina Goldstein. The pictures are portraits of thirteen people, though one portrait features two people, and the unpeopled portrait is of a black leather motorcycle jacket, on the back of which is a painted portrait of a skull and cross bones. Backgrounds for the portraits are in either black or white. All but two of the portraits are in colour.

The portraits are displayed at North Vancouver’s Polygon Gallery, in an area known informally as the “main floor gallery.” I like this space because its south facing wall is transparent, made of glass, through which passers-by can get a taste of what the Polygon is and does. It’s a little like a TV in that way, or in the way people once stopped to watch TV when they were displayed in furniture store windows. This was still common when Punk first appeared in the mid-to-late-1970s, before larger screens were installed on downtown buildings, or the smaller screens we now carry in our pockets.

It is from the main floor gallery that I am making this recording, sitting by the window dressed in a dark grey suit, in an effort to make myself incidental to those outside who are slowing down to take in Goldstein’s model-collaborators, all of whom identify as Punk, almost all of whom as original -- or OG -- punks. And of course we know them as such, not only by their regalia and body modifications -- leathers, metal studs, patches, tattoos, scarifications and hairstyles -- but by their ages, almost all of them born in the 1950s and 60s.

When Goldstein embarked on this project, her focus was on those who were part of the early Vancouver and Victoria punk scenes. Punk emerged while I was a high school student at Kerrisdale’s Point Grey Secondary, and in 1978 a group of us, inspired by sensational news coverage of the British punk scene, entered the school’s Gong Show to perform a punked up version of T. Rex’s “Baby Strange”. This was a year before The Subhumans performed a lunch hour concert there -- what amounted to my first punk show. Though not really, as some have argued, because to see a punk show you have to see it in its own milieu, like Vancouver’s Smilin’ Buddha Cabaret, to which I disagree, given punk’s brave power to intervene and reveal, if not upend, values that the status quo assumes are universal.

Apart from that Gong Show performance, I have never signified as Punk, but I could relate to its critique, its burlesque of mainstream cultural norms. Aesthetically because popular music had become bland (SoCal soft rock), metronomic (disco), pretentious (prog rock) or sexist/racist (country & western) -- and soon enough politically because those holding power maintained that power by wielding atomic bombs or extracting resources without regard for those whose land they were on, to say nothing of what unsustainable extraction has done to the planet. Just as climate change is today’s slow boat to extinction, the threat of nuclear proliferation in my youth meant the planet could be cancelled before I could make it home to kiss my mom goodbye.

Aspects of this critique are carried in the responses to the questionnaire Goldstein distributed to her model-collaborators. Not directly, in the academic sense, citing Marx, Hannah Arendt or Guy DeBord, but in a manner that became increasingly popular in postwar North America: through the body, the presentation of self in everyday life. The beats and the hippies performed their critique through styles of dress and gesture that reflected their attitude towards the status quo, and many of the punks responding to Goldstein’s questionnaire seem to recognize this through their own form of cultural self-expression. Here’s how Unnatural Silence band member Myles Peterson responded to the question, “Has punk changed much since the 1980s?”:

“Punk isn't a thing or fad or a movement. It's attitude and it's a way of life. It's always been there. It will never die. It doesn't matter how you look or what music you like, it's about not taking shit from anybody, standing up for [your]self and looking after people who are less fortunate, and not buying into corporate monsters that are destroying the planet, people, culture and everything that we care about.”

The reader need only substitute “punk” with “beatnik” or “hippie” and the comment would stand -- the only difference being one of tone and intensity. Death Sentence drummer Doug Donut, who is of Sioux ancestry, tells us at the outset that he was raised by activist parents, and later, to the question “Is punk here to stay?” he replies:

“Counterculture is. And it sure as fuck ain’t ''Princess of Punk'' [Zandra Rhodes] on Leno. No offence to the “Princesses of Punk,” but Bad Brains is punk. NWA was punk. Public Enemy. D.O.A. It’s fuck you and 100% no kissing babies for the music biz machine. Get mad. There’s Neo-Nazis rolling around. And I’m gonna sell PERFUME? Nope.”

Here is skater and Dayglo Abortions affiliate Lisa JAK on that same question:

“I think that ‘Punk’ has always and will always be here. Anywhere and anytime that there is oppression, ignorance, intolerance and fucking stupidity, some punk will be there to question and fight it!”

Goldstein gave her model-collaborators little instruction on what to bring to their shoot, apart from their "leathers". As for poses, these too were left to the model-collaborators, though it should be noted that the poses chosen for display, as portraits, were decided by Goldstein and exhibition curator Helga Pakasaar. Strangely, none of the portraits reprise the wild-eyed, teeth-baring, nostril-flaring intensity I associate with punk’s early days. Nor the sneering contempt of Johnny Rotten, Billy Idol or Lydia Lunch. Not even the leave-me-alone indifference of Patti Smith or Exene Cervenka. While the portrait of music manager wendythirteen has its subject standing chin-out, hands on hips, many more appear sad, pensive, tired, humbled, tentative or lost. The Black Haloes’ Billy Hopeless almost seems repentant.

The most arresting portrait in the exhibition, the one that links nicely to the Steven Shearer exhibition in the upstairs gallery, is that of Murray “The Cretin” Acton, frontman for the Dayglo Abortions. The Cretin, who is 61, appears naked from the waist up, the buckle of his low-slung trousers appearing just below the top of his pubic bone, the deep lines of his groin capped by the arching banner of his lone tattoo: FUCK YOU PIG. The Cretin’s torso and arms could belong to a thirty-year-old, while his weathered-face and sea hag hair puts him closer to eighty. As for his expression, his eyes are dead, but he is clearly looking at something, not for it. Yet like everyone else on the walls of this main floor gallery, Acton knows who he is, in all his contradictions, otherwise he wouldn’t be here.

Posted by Michael Turner at 7:55 AM