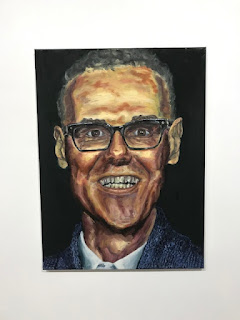 Opening this week at CSA Space is Rowan Melling's Boss Bodies, an exhibition of 16 painted portraits of 16 disembodied heads. Applied to these decapitations are faces that many Vancouverites look to -- or away from -- for cues on how to appreciate a city that these bosses of construction, real estate,  secondary manufacturing and retail claim to be building, beautifying, writing, empowering ...

Most remarkable about these portraits (apart from the absence of their "entitled" bodies) are the bodies "playing" them. For example, when I look at the face of Bob Rennie (above), I see Bob, but I also see Jim Carrey (with a hint of former Social Credit MLA Pat McGeer thrown in). Same with Ian Gillespie, as played by Matthew McConaughey 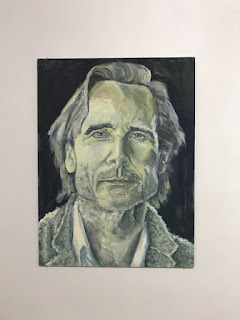 and Michael Audain, as played by a Paper Chase-era John Houseman. 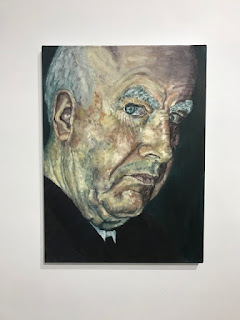 Whether inhabitations like these are the intention of the artist, I don't know. What I do know is that the evocation of these actors and their styles stands in for the absence of the bodies these bosses have been removed from, enlivening them in ways that are not inconsistent with how they appear IRL (the ludic Bob, the laconic Ian, the patrician Michael), but also underlining the ongoing performances they are engaged in in their effort to exact the same of those living in "their" city, where the best advice to those trying to survive that city is to be anyone other than yourself.

Posted by Michael Turner at 9:19 AM