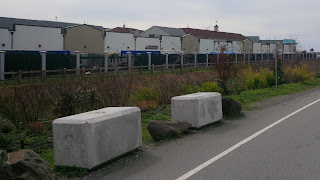 With Anne and Gareth leaving the west coast for Québec this June I want to spend as much time with them as I can.

On Sunday Gareth and I met in their backyard for tea and garden observation. Following that, we drove to Iona Island for a walk.

Gareth took the wrong turn off the bridge and we ended up at that market town known as McArthur Glen, where well-known brands have shops subtitled "Factory Outlet," and you can get a Japadog that tastes like the bucket it came in.

The picture up top is of the north end of McArthur Glen. In a small gated area you can read in both English and Salish a didactic entitled "Who We Are From."

Below is a 1966 Dan Graham picture of tract housing in Bayonne, New Jersey: 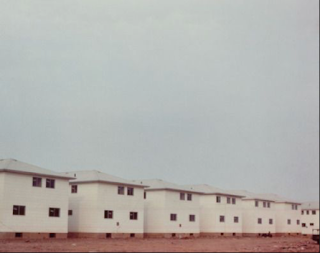 On our walk back Gareth pointed out this oddity: 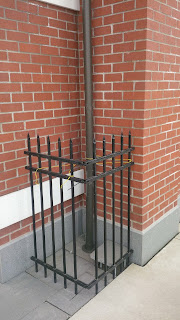 "What are they trying to protect?" he wondered, and I took its picture in case anyone might know.
Posted by Michael Turner at 9:53 AM