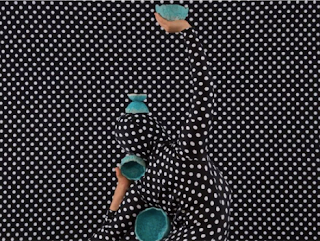 Vancouver's Capture Photography Festival runs from April 1-28. I have seen none of it thus far, which is a difficult thing to do, given that it is everywhere.

The picture up top is Adad Hannah's An Arrangement (Polka Dots) (2018). The picture is reminiscent of Herb Gilbert's Ditto performance (below), which was part of the Vancouver Art Gallery/Intermedia co-produced Electrical Connection exhibition of April, 1969, except Hannah's "performance" is a picture that highlights objects (pottery) as still-life over authorship (performer) as portraiture?