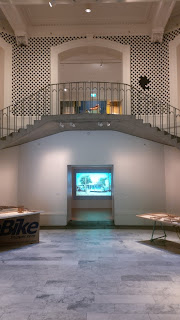 For years I knew of Alison Yip as a gallery artist who drew and painted scenes that appeared less like they were entered through her own experiences than received at a distance through her or someone else's camera. Then recently I found myself on the ground floor of the Vancouver Art Gallery where, through the application of lattice wallpaper, Yip has transformed an interior architectural space (the rotunda) into a pre-fab exterior one (a gazebo). In the framed alcoves protected from this at-times broken motif, a series of painting experiments that look like they were conducted by À rebours (1884) anti-hero Jean Des Esseintes, après Bouvard et Pécuchet. 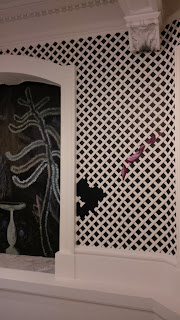 A Symbolist intro if ever there was one. Not that any of the younger artists in Vancouver Special: Ambivalent Pleasures have the means to finance a Des Esseintian retreat towards refinement and, ultimately, spiritual transcendence. To think as much would be dreaming. 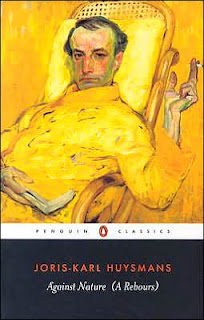 I don't have too much to say about Vancouver Special: Ambivalent Pleasures, apart from its unfortunate collapse as I turned the corner into the first big room (I travelled the exhibition clock-wise). All that dreamy interior stuff (Tamara Henderson, Maya Beaudry, Derya Akay) -- only to be met by the work of four artists whose objects were not so much arranged to any generative effect by the curators but left to approximate the discomfort of a high school detention, where the detainees did nothing other than submit to an uninspired -- or indeed ambivalent -- presentation of their work. 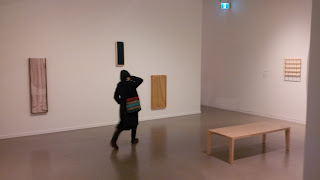 Seems the smaller the exhibition space, the more Vancouver Special: Ambivalent Pleasures resonates as something from or of here. A material-experiential room that includes the work of Anne Low and Michael Drebert. Garry Neill Kennedy's re-mount of a mid-1980s Or exhibition. And my favourite, Julian Hou's old man SRO EDM crib, with the north wall removed to reveal a construction site on grounds that belong to a province whose current government, under the influence of its biggest fundraiser, is doing what it can to un-support the VAG's attempt to finance a new building. Like the broken holes in Yip's lattice pattern, Hou's room (and its view) is a window to a city as it always has been and, if things continue, always will be.

Posted by Michael Turner at 9:36 AM