A Reply from Tim Lee 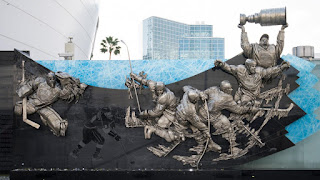 A couple of weeks ago the Los Angeles Kings hockey club unveiled a monument to itself outside its home rink, the Staples Centre, in downtown L.A. Entitled 50th Anniversary Monument, the work is comprised of glass, granite and bronze and is authored by Itamar Amrany, Julie Amrany and Omri Amrany. 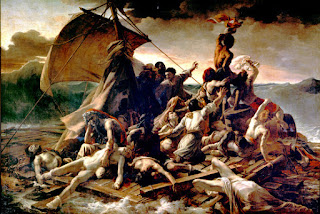 When I first saw the Monument I was reminded of Géricault's The Raft of the Medusa (1818-1819). I mentioned this in an email to artist Tim Lee and he responded below:


The Raft of the Medusa, of course, is based on a disaster.

There are several confusions in this sculpture – and they are simultaneously formal, conceptual, and ahistorical – but the first, immediate uncertainty is how a public monument to glory, and the totality of effort that underwrites it, could be rendered with such disastrous results. Given the hagiographic context, corporate setting, and seemingly design-by-committee/team-sport ethos in realizing it, this should not be a surprise. Nonetheless, if there is a broken line between simple intention and baroque mystification the set of askance responses that the work yields is somehow appropriate.

A lane-change in perspective then, from Théodore Géricault to Charles Ray, a Los Angeles artist who has a neurotic obsession with the psychology of space. Like Light From The Left (2007) and Oh Charley Charley Charley (1992), more than a few of his sculptural concerns are illustrated here. Among them, an Anthony Caro/Rubenesque relationship among parts. A shallow depth that strobes between competing forms of representation on a single plane: between the granite and glass of its base and armature; the bronze cast figures of the foreground (Dionne, Taylor, Kopitar, et al) set against the flat, two-dimensional rendering of Drew Doughty - the ne plus ultra prototype of a two-way player. Also, an explicit neuroticism - or rather, a series of sudden recognitions of a familiar object that were previously unavailable.

All the bizarre design elements combine in forcing us to “read” the work - an illustrative process of rendering what is already obvious even more literal: it’s the cursive Nike-like swoosh; the comic book flourish of frozen motion lines; the field of blue interlaced with an allover skate line pattern - like Pollock, the floor perpendicularly becomes a wall. History progresses linearly and sequentially from left to right – from Rogie Vachon in 1971 to Dustin Brown in 2014 – with an exclamation point. It is impossible to read it backwards. The Stanley Cup punctuates the work, and after your eye scans to it, you effectively finish an experience of the sculpture - and this is where an oblique understanding of the monument lasts.

First, the Cup is at its most triumphal when held horizontally. I never realized it until now, but the act of claiming the trophy requires an upending of its inert, vertical standing. Second, the Cup, composed of silver, is recast here in bronze - a more economical and industrial material that is less precious yet characteristic of a lasting and necessary permanence - no good monument is ephemeral. Finally, Lord Stanley of Preston’s Cup, and its history as an emblem of British colonialism, is recast a century later in the conceptual centre of Staples Center - a gaudy, corporate entertainment district held aloft by an American player who captained a championship team named after the symbolic rule of British royalty. A hundred years later, empire remeets empire, this time in hysterical form. Therein lies the expansion and closing of a strange loop, and a diagonal reading of a neurotic sculpture.

Posted by Michael Turner at 7:54 AM