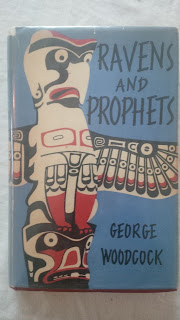 Among the gifts I received this Christmas was George Woodcock's travelogue Ravens and Prophets (1952). I suspect this book was given to me based on my recent travels through British Columbia, a trip that Woodcock, his wife Ingeborg and their New York friends David and Audrey undertook in the late-1940s.

Books like Woodcock's are invaluable when it comes to details of places we think we are familiar with, but also the time it once took to travel between these places -- cars, roads, boats and waterways being slower then than they are today.

Although I am only twenty-five pages into Ravens and Prophets, I am more than a little uncomfortable with Woodcock's snotty Britishness, an attitude that was common to the 1960s and 70s Vancouver I grew up in, where culture, it was believed, was not so much made but received (from Britain).

Worse is Woodcock's descriptions of the people he encounters, from the couple that he and his undescribed wife are travelling with ("David is a tall, dark, crinkly-haired Jew"; "Audrey, a dumpy girl with finely cut features, the daughter of an old Polish Jewish anarchist family") to a "fat Cowichan squaw" and "slow [Chinese] men with their gaunt brown faces over which the skin stretches tightly to give an almost mask-like quality to their patience, and the bustling, round-faced Chinese of the younger generation." This from a man described on the BC Bookworld website (in an unattributed quote) as "quite possibly the most civilized man in Canada."

One paragraph that carries more than the usual reductions comes at the end of the second section in "Part One", as the Woodcocks, David and Audrey visit the "lower part of East Hastings Street," "one of the seedier ends of Vancouver":

The threadbare, bottle-nosed men who stood in doorways and clustered at the street corners -- each a solitary and misanthropic individual, no matter how he might try in the forced joviality of his kind to dissimulate his essential lack of interest in the world outside -- seemed to belong to the same dying age of the Wobbly papers. They were the last representatives of the Great American Bum, the obstinate decaying lingerers from an age when the migratory workers of the west aroused their rebellion against the materialistic and nationalistic standards of the young North American civilization. Today the majority of these workers have surrendered to the allure of enlightened capitalism, with its high wages and high standard of living. Even the struggles of the 'thirties are forgotten -- youths of twenty do not know of such events as the occupation of the Federal Building in Vancouver by the unemployed during they own childhood -- and it is now only among a few intellectual rebels and these remaining derelicts who support the skidrow walls from East Hastings Street, Vancouver, down to Mission Street, San Francisco, that you will find some memory of the old days and some lingering loyalty to their more honest and idealistic values. (p. 20)

A musical take on the Great Historical Bum can be found in Odessa's recording of Woody Guthrie's "The Biggest Thing That Man Has Ever Done" on Vanguard Record's excellent tribute album The Greatest Songs of Woody Guthrie (1972).
Posted by Michael Turner at 8:31 AM