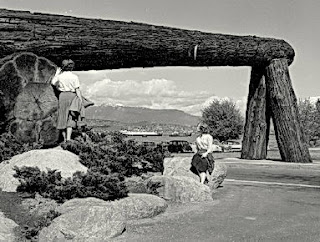 Lumbermen's Arch is located at the north end of Stanley Park, on a midden "built" by Coast Salish residents of the former Xway Xway village. 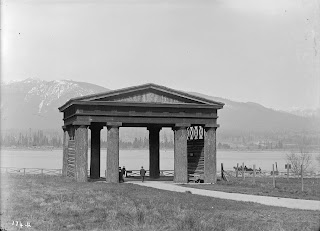 Before that, in 1912, the Arch was located at Hamilton and West Pender Streets, a block south of where Canadian Pacific Railway employee Hamilton charted what became known as Vancouver after what became known as Vancouver was given -- given! -- by local "officials" to the C.P. Railway for locating its terminus not at Port Moody, as was intended, but a few miles west of it in what is now Coal Harbour. 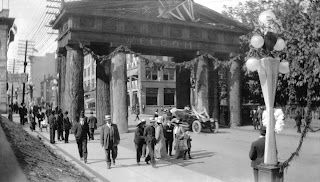 Lumbermen's Arch was built by British Columbia's lumber barons. That it sits on a shell midden believed to contain over 500 years of continuous Coast Salish occupation (most of it prior to European contact) is symbolic of settler-indigenous relations in this province.

What histories would this midden reveal? At the very least we would know more about the effects of that devastating earthquake of 1700.

With the permissions of local First Nations, I would like to see this midden explored, made into a living museum, if not returned to those who had never given it up in the first place.