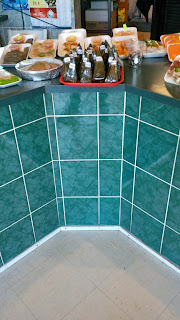 Kingsway Deli was for years my number one after moving to Kingsway in 1994. Then one day, while waiting in line for my banh, it occurred to me that the place was not very clean. So I tried other delis, eventually settling on Kim Chau, whose former owner (Chau) I enjoyed having coffee with -- listening to her stories of Vietnam, how she had a congee stand at an Indonesian refugee camp, and of her family's experiences in Canada.

The first thing I noticed upon my return to Kingsway Deli was its cleanliness. Secondly, its orderliness. Something that stuck out was its new counter; in particular, its centre section, which looked odd to me (see above).

I stared at this centre section wondering how the designer arrived at its pattern: the first set of four vertically-stacked tiles to the left are thin; the middle tiles are the same factory standard as (most of) those on the sections on either side of the centre section; and the third set of tiles are about half the width of the middle tiles.

Then it dawned on me: the tiles were laid out not as a symmetrical design but as left-to-right (or right-to-left) writing. The tiler started at one end and tiled until he or she came to a bend, where the tiles were split to fit. To riff on Gertrude Stein, whoever was behind this counter "act[ed] as if there was no use in a [symmetrically-designed] centre."
Posted by Michael Turner at 10:32 AM