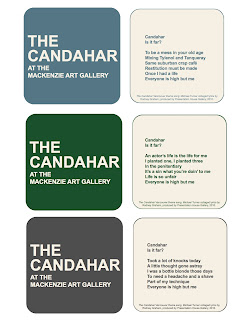 A couple months ago I received a request from the MacKenzie Art Gallery to re-print a cento built from twelve Rodney Graham songs.

This particular cento is the lyric for a theme song I wrote to accompany Theo Sims's Candahar Bar at Vancouver/Whistler's 2010 Olympic and Paralympic Games. Entitled "Candahar (Is It Far)?", the lyric is scheduled to appear on cardboard coasters during the bar's run this spring and summer (as it did for Presentation House Gallery's Olympic version).

The image up top is of the three coasters the MacKenzie will be printing, with each coaster carrying one of the song's three five-line verses. The only lines that are not Rodney's are the title (repeated three times) and the refrain ("Everyone is high but me").
Posted by Michael Turner at 7:21 AM