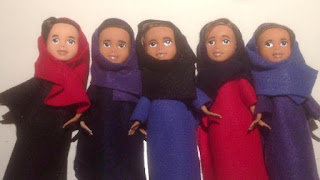 The CBC tells a story of woman who is adapting Bratz dolls for Syrian refugee children.

Years ago a friend returned to Vancouver from rural Peru with a woman he was hoping to marry. When their wedding day came, his friends showered them with gifts, a few of which were handmade ceramic bowls made by local potters. The woman was thankful, of course, because she saw in these gifts not the object itself but the thought behind them. However, of all the gifts they opened, the one that brought her to tears was a six-speed mixmaster -- "con la función de pulse!"
Posted by Michael Turner at 10:19 AM