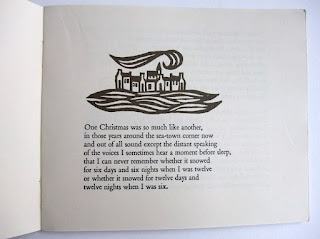 Looking through Swansea's weather records, I see that neither of the years Thomas mentions in A Child's Christmas in Wales received the snowfalls he is unsure of. The only year that comes close is 1947, when Wales was "buried beneath huge amounts of snow," and Thomas and Caitlin were sponging off the Taylors in Disley.
Posted by Michael Turner at 3:28 PM