Published by Black Dog, Letters features essays by myself and Jamie Hilder, David MacWilliam, Scott Watson and William Wood, in addition to reproduced images of works (such as the one above) that appeared in the exhibition of the same name that I curated with Scott at the Morris and Helen Belkin Gallery in 2012.

Below is another "Coke" inspired concrete poem that was, until at least the early-1980s, a staple of Norton's English Literature anthologies. 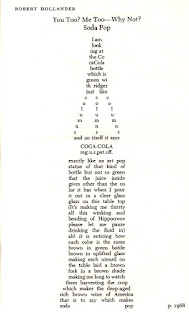