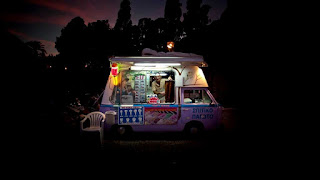 Outside my house, at this very moment (11pm) there is a noise that sounds like a movie submarine sonar ping (like this, but slightly lower and with a longer interval between pings). It is coming from an ice cream truck that comes around my neighborhood at various times of day (and, apparently, night). There are no children around, because it's 11 o'clock at night, and frankly even during the day, the sound is eerie. Is this. .. a common thing for ice cream trucks? I'm used to annoying music in the afternoon. Is there some rational explanation as to why this truck plays this super creepy noise in the middle of the night? Because it seems like an odd business decision on both counts.

Now, for the past month, it comes out at night too, from like 9:40pm, to as late as 1am. There's clearly nobody, and the stupid truck stays there for like 10 minutes and the stupid song gets annoying.

the only ones who I see buying at night are the hobo looking guys that look like they're high or drunk all the time.

You think something might be going on...selling drugs or something??

I throw eggs at ice cream truck all the time, but it doesn't seem to bother him, as well as a shoe...I make sure I hit the window, or the hood though.

The one thing I WON’T miss about Summer, is the creepy Ice Cream truck that frequents our neighborhood.

There’s lots of reasons as a mom to loathe the Ice Cream truck:
– the ice cream is over priced and most of us moms keep a freezer stocked of popsicles and otter pops to have on the ready, anyway.
– the music! Yuck! The music is like a kid trap! If the music matched the actual appearance of “the ice cream trucks” that drive by our street, it would be scary!
– the guy driving the truck. Oh geez! I have yet to see a normal ice cream truck driver.
– the truck itself. Can you say creepy?! It’s never the kind of truck that you would imagine for an ice cream truck that your kids would run up to.
Posted by Michael Turner at 8:27 AM