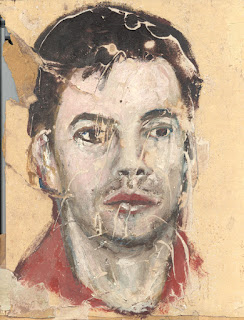 It was 1994 or 5, and artists Phil McCrum and Reid Shier had a studio near my bar, the Malcolm Lowry Room, in Burnaby. On Fridays they would drop by for pints.

One day Phil pulled out a Polaroid camera and asked if he could take my picture. I was tempted to ask why, but I didn't have time for what could easily be one of Phil's perfectly oblique, time-demanding "answers". So I said sure, and that was that.

In 1998, Phil opened a large exhibition at the Or Gallery, entitled Tear. One of the more memorable works in the show was A diagrammatic Interpretation of the French Revolution Based on Georges Lefebvre's "The French Revolution, From its Origins to 1793" (1998), which, in the words of Or Gallery Director/Curator Reid Shier, "consisted of 49 small oil on wallpaper portraits of McCrum's friends and acquaintances."

The image up top is of a portrait Phil painted of me as Jean Joseph Mounier, based on that Polaroid. The image below is of Deanna Ferguson as Manon. 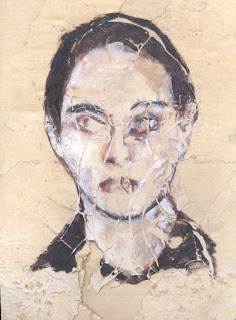 Posted by Michael Turner at 8:43 AM