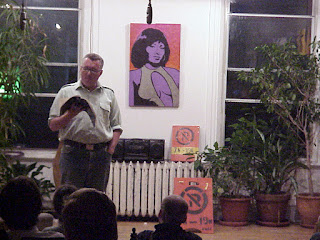 Hard to believe ten years have passed since Canadian Art flew R.M. Vaughan to Antwerp to write a "diary" entry based on MUHKA's Intertidal: Vancouver Art & Artists exhibition. As if to commemorate that entry, the CBC commissioned Vaughan to not even leave his home this time so he could do the same to the Art Gallery of Nova Scotia’s The Last Art College: Nova Scotia College of Art and Design, 1968-1978.

I am fine with Vaughan writing to exorcise his demons, just as I am fine with that other cartoon, the CBC’s Don Cherry, launching “racist” epithets at European-born hockey players on Hockey Night in Canada. But to frame these rants as journalism, to have Vaughan’s CBC piece stand in for thoughtful visual arts coverage when our underfunded public broadcaster already has so little time for the visual arts, is so Fox News.

"This is not to underestimate the value of iconoclasm, a role Vaughan seems to relish here; but only time will tell if we have a corollary to lowbrow art criticism or Stuckism in the making."

Well, if time has told us anything, Dick Averns, it has told us that after ten years R.M. Vaughan still can’t help himself. So yes, fair comment, one reminiscent of what Gabrielle Moser once said of the art of Douglas Coupland:

"Coupland's work looks like what popular culture would have us think contemporary art is supposed to look like."

With Vaughan, all you have to do is substitute “Coupland’s work” with “Vaughan’s prose”, and  squeeze criticism in-between “art” and “is”.
Posted by Michael Turner at 12:01 AM