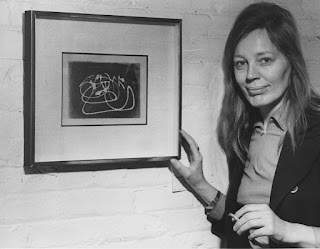 Apropos of yesterday's post, Chris wrote in with Claire Bishop. Indeed, who among us has not read Bishop's 2004 October magazine critique of "Relational Aesthetics"? Bishop's latest book is Artificial Hells: Participatory Art and the Politics of Spectatorship (2012), where we are reminded more than once of Sartre's oft-quoted line about "other people."

Another critic not on ranking.com's list is Joan Lowndes, who, like me, was curious enough about Vancouver to remain here, watch it grow and fester. Lowndes was a long-serving art critic at the Vancouver Sun, and through her writing gave us not only an aesthetic history of the city, but a social one as well. Thank you Reid for reminding me of Joan Lowndes.

At bottom is a 1972 piece that Lowndes contributed to the country's largest visual art publication, artscanada (what later became Canadian Art). Up top is a picture of Jytte Allen, a gallerist mentioned in Lowndes's article (thank you to arts reporter Kevin Griffin at the Vancouver Sun for posting Allen's picture and its accompanying text).

A mild form of future shock is affecting the citizens of Vancouver. Pleasant homes are suddenly knocked down and carted away in trucks, to be replaced by high rises. Boutiques and cafés open continuously in Gastown, the former Skid Road now purged and prettified by real estate interests. There is a sense of bustle. Money is available for the superfluous or for a new kind of investment, as word has got around that art, THINGS maybe, are safer than stocks.

On this cresting affluence galleries, too, have proliferated. But they know the score. The money is for established artists: prints by Picasso, Mirô, Chagall or a big glowing painting by Shadbolt. Risk capital is scarce. It is in the hands of a few professional people, like chartered accountants or architects, not business tycoons. Even the most idealistic galleries realize that to pay their rent they must sell names. Only then can they afford to support young unknowns.

This is not to denigrate the expanding scene, which makes for welcome variety, but simply to state an economic fact. The opening of the new Bau-Xi Gallery — the most important still — in premises on South Granville Street at the edge of a wealthy residential district, is a symbol of the thrust to capture the non-connoisseur. The original Bau-Xi has an atmosphere of discreet luxury with its golden wall-to-wall carpeting and white walls, but the informality generated by Paul and Xisa Wong and the Bau-Xi babies remains.

Another new gallery of extreme elegance, though small, is Elizabeth Nichol's Equinox, strategically located on busy Robson Street. It has entered the field with a determined professionalism and money for advertising. It handles the work of around 35 artists including such prestigious figures as Albers and Soto, top Canadians like Jack Bush, and a smattering of B.C. artists. So far its emphasis has been on graphics but it also shows paintings and sculpture. Its Summer Stock, featuring serigraphs by Segal, Trova and Bayer, is stunning.

The Galerie Allen, in spacious quarters in Gastown, opened two years ago but only recently achieved any prominence. Jytte Allen, who ran a gallery for eight years in Copenhagen, tried at first without success to introduce lesser known Europeans. However, through international contacts, she has since organized some handsome shows, such as that of Vasarely's silkscreens and multiples. At the same time the drop in level to her local stable can be brutal. An exception was the one-man show by Robert Davidson, a spiritual grandson of Max Ernst, who paints monster birds in a sinister no-place lit by pale suns.

Forced out of fashionable Gastown by rising rents, the Mido Gallery, directed by sculptor Werner True, and Marion Fuller, took itself to Main Street. It is located in a former warehouse for scrap metal, with high ceilings and brick walls. Trucks rumble by and a cement factory is nearly opposite. But many people come in off the street in what is another rapidly changing part of the city. The Mido's initial show was Victoria Perspectives, from which Pat Martin Bates easily emerged as the most impressive artist. Work dating back to 1962 formed a retrospective in miniature of unfailingly imaginative élan. Her latest manifestation, a wall piece in vacuum-formed plastic (Arctic Castle Circle #5), constitutes her first big scale attack on sculpture as opposed to her bibelot-like Plexiglas cubes. The Mido Gallery also intends to carry tapestries by local artists.

Pioneering in the field of photography are the Mind's Eye in Gastown and the Gallery of Photography in North Vancouver. Mind's Eye, upstairs in an old awning factory, is run by two young couples: Randy Thomas, photographer and filmmaker with his wife Kathy and photographer Art Grice with his wife Emily. They combine with the gallery a bookstore on photography and are also screening films made by Canadians on both coasts. In their loft situation they can display well over 100 photos, as they did for the one-man show by Robert Minden, an ex-sociologist now tenderly exploring people from behind the camera.

The Gallery of Photography, more modest in setting, has nevertheless shown work of quality, such as Image 3, in the series put out by the Still Photography Division of the NFB.

Perhaps one should end this ramble at what is the focal point of our loose West Coast system: the Vancouver Art Gallery. Because private galleries must exercise caution and also charge some sort of exhibition fee, there remains an uneasy feeling that many promising artists are barred. The VAG has therefore set aside two small rooms called Exploratory Space and Free Space. The former is designed 'to reflect the advancing edge of sensibility and discovery' in month-long shows screened by the Gallery. Free Space, on the other hand, is pot luck: 25 artists whose names were literally drawn out of a pot by the president of the VAG Council. They may use their space for one week only but they do get exposure. The first show was an unassuming one, mainly of photos, by Norm Silwanowicz.

The Centre for Contemporary Canadian Art
The Canadian Art Database: Canadian Writers Files
Posted by Michael Turner at 8:50 AM