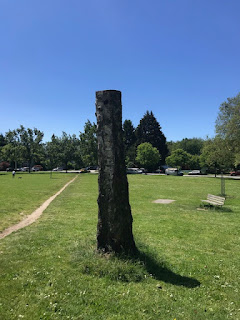 I can't remember when this too-tall-to-be-a-stump stump was a living, breathing birch tree, but it was once, and now it is a marker for itself and the life it once possessed, not to mention a luxury tower for bugs. The picture was taken on yesterday's walk back from the dentist, where Brenda cleaned my teeth, measured the pockets in my gums and noted positive developments in some places (a "9" is once more a "6"), but "you'll have to remember to hold the brush on that area a little longer than usual."

I have lived where I do long enough to have myriad routes to and from it. Walking somewhere is never the same walk home in reverse, and yesterday was no different, coming back along East 13th, where there's a take-a-book-leave-a-book library near Charles's house. Amazing the books I've found there. Given how smart Charles is, I expect some of these books might have been his.

Yesterday I withdrew two books: Mary Sarton's Journal of a Solitude (1973) and David Foster Wallace's story collection Girl With Curious Hair (1989), the back of which features the author wearing what I always thought was a bandana, but could well be a bandage, or at least a sign for those who paid enough attention to his writing while he was alive to know he struggled with mental health issues.

For Sarton, her mental health required a rotation of social (professional) commitments and solitude, with the latter not necessarily a restful, peaceful place.

I have only read two entries from Sarton so far -- "September 15th" and "September 17th". Here's the first entry:

"For a long time now, every meeting with another human being has been a collision. I feel too much, sense too much, am exhausted by the reverberations after even the simplest conversation. But the deep collision is and has been with my unregenerate, tormenting and tormented self. I have written every poem, every novel, for the same purpose -- to find out what I think, to know where I stand. I am unable to become what I see. I feel like an inadequate machine, a machine that breaks down at crucial moments, grinds to a dreadful halt, "won't go," or, even worse, explodes in an innocent person's face." (12)

Later in the book, after receiving a poem sent to her from a twelve-year-old at the urging of the child's mother:

"The child really does look at things, and I can write something helpful, I think. But it is troubling how many people expect applause, recognition, when they have not even begun to learn an art or a craft. Instant success is the order of the day: 'I want it now!' I wonder if this is not part of our corruption by machines. Machines do things very quickly and outside the rhythms of life, and we are indignant if a car doesn't start at the first try." (15)

Posted by Michael Turner at 7:28 AM