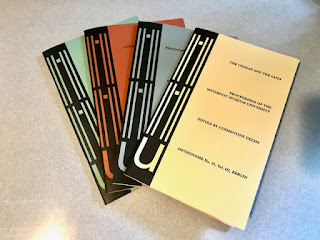 rob adores his wife and two daughters and they are everywhere he is and does. One of his daughters likely provided the cover of his Autobiography (Ottawa: above/ // /ground press, 2022). Here are the opening lines of his opening poem "Autobiography of Green":

Each poem, at a particular time. A line of versets,
iambic feet. The children                       ,dither: compass
the backyard. Their summer playhouse, builds.
They wait, they wait.
Their perpendicular step.

Don't take measurements of the situation, of life,
comparisons. Just look at ewe and prunes; keep using
semi-colons, it never ends, but it sort of does.

Metronome is new to me and its volumes carry a conversation on the concept of the Metabolic Museum-University. Among those gathered are Krista Belle Stewart, a Syilx Nation Citizen Aüslander living in Berlin and the UK writer Tom McCarthy. At one point Stewart tells the story of her land inheritance, how she kept a bucket of that land with her on her travels, often driving around town with it. Shortly after that, McCarthy, a Humean thinker prone to association, recalls Count Dracula's importation of soil from his native Transylvania to his London property, and then reminds us that Dracula's author Bram Stoker was an Irishman living in England, and that "[t[here's a colonial history there too." (Vol. III, p. 12). Hmmm, how will Stewart respond to McCarthy's association? I read to the end of the volume, yet find no sign of Stewart. (With silence, then? But what kind of silence? Operative? Diffident? There are many kinds of silence.)

Billed as "The Brain Issue", Torch features the usual balance of achievement in the Arts, Sciences and Business, and includes a profile on Dorian Fraser (MA, '13), the curator behind UVic's Legacy Maltwood Gallery's Pop Anthropology exhibition of artist, Western Front co-founder and UVic alum Eric Metcalfe (BFA, '71, Hon DFA '21), the only artist I know of who hangs his degrees on the wall of his home. Dorian is the child of a judge (Peter Fraser), who, as a lawyer in the 1970s, wrote the Western Front's constitution and, as Dorian put it, "played in the Western Front's kazoo band."