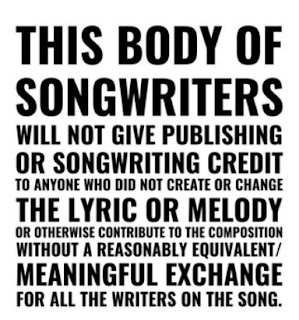 I saw the story yesterday. A group of songwriters calling themselves The Pact are refusing to allow singers to receive as much as 30% of their writing credits when a singer has had no "meaningful" involvement in the writing of a song. This is not a new phenomenon.

Apart from the song "amalgamations" of A. P. Carter, Colonel Tom Parker would insist that certain songs offered to his client Elvis Presley carry his name on the writing credits, while producers like Phil Spector hustled credits out of lesser known writers and musicians for prepositional changes to songs he had arranged and recorded. What is new is that there are less royalty monies available to musicians now that the era of ubiquitous radio play is dead; that digital downloads amount to little more than a tenth-of-a-penny for their Authors and Composers; and that touring during a global pandemic has been declared unsafe, if not illegal.

What is new is not to be confused with what has changed, and it is here that the list is longer, more complicated. One of the biggest changes concerns the way we have come to think about creation: not as a singular endeavour, but as a collaborative or relational activity. Not necessarily a bad thing. But when inclusion is manipulated by those seeking more of the pie than they already have, you have a problem.

Does a singer deserve a writing credit because their spectacular presence is such that the song they record would be nothing without their ability to take it beyond the kitchen table where it was written? Is melisma an essential part of a song's melody, or an example of its interpretation? This, like everything else right now, is a cultural issue. And no, The Pact is not all white guys.