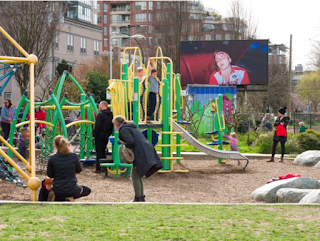 Sleeping, resting, passed-out are all descriptors we apply to images or pictures of people with their eyes closed. Some might even say exacerbated, given the public's growing discomfort with anything ambiguous. That too is tiresome.

One self-described member of the public told me that "instead of funding billboards of passed-out people, the money should be spent on housing them."

"Would you support a public housing project along the corridor where these billboards are placed?" I asked, knowing this person lived on the west side.

I was told I was "being difficult."

"Seems the difficulty," I said, "is in your inability to respond to the question. It doesn't have to be yes or no; you're entitled to your conditions."

"Coincidence," I said, "the head of the festival that commissioned these billboards is a lawyer, too. She has a nice quote in response to the billboard company's removal of the signs. She said, "Steven [Shearer]'s project has done exactly what it intended, which is to start conversations about the divide between public and private space."

"Well, we're not having one," said the lawyer, backing away from me like I was some kind of animal.

Posted by Michael Turner at 8:47 AM