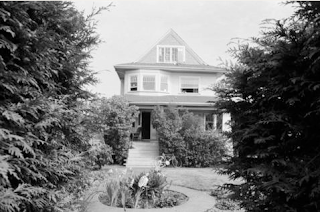 The house at the northeast corner of East 20th and Clark is known as one of the oldest and most enchanted houses in the neighbourhood. I have heard that it was built in the late-19th century to oversee a vast farmland and, in the 1960s, was the dream home of a young girl who later married a man who bought it for her.

In the 27 years I have lived in the neighbourhood the house stood as a shared house, where in summer its inhabitants gathered on its south-facing front veranda to enjoy meals, drinks and sometimes project movies and sporting events. Making the veranda even grander, a long front garden and a central vignette. 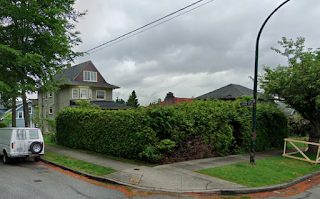 A recent zoning decision to allow a new house in the front garden of the original house has destroyed the majesty of its veranda, which now faces a poster-sized bathroom window no more than six feet from its front step. What a shame. This new house just sits there so ... weirdly. 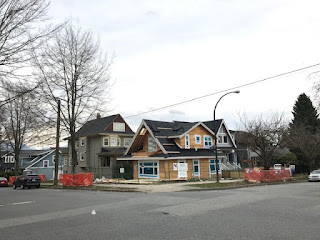 Posted by Michael Turner at 9:40 AM