Bob Rennie and the "New Economy" 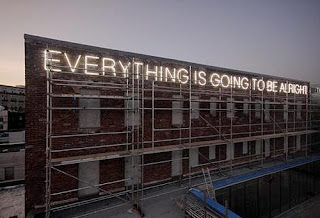 Speaking in this morning's Globe, Bob Rennie had this to say of a new stand-alone "iconic" Vancouver Art Gallery:

“…nobody is addressing what it is to spend $300- or $400-million dollars in this new economy and it is irresponsible to simply go out and say we want an iconic building," he says. “The public discussion should now be around alternative models and the tough questions that have to be asked in this new economy: Do we spend the money on art, or architecture? And how does this institution fit in with the cultural fabric of Vancouver as a whole? It cannot be talked about in isolation.”
Note the repetition of "new economy." Is it not reminiscent of an earlier Social Credit provincial government's repetition of the "New Reality" to justify draconian cuts to public sector workers in the early 1980s (what the SoCreds and their Chicago School-influenced advisors at the Fraser Institute  deployed to sell their "restraint" program)? Strategies such as these, when applied to public infrastructure, are a hallmark of the neo-liberal choir, of which Rennie is our boy soprano.
But there are other "new economy" strategies, most notably the Depression-era New Deal that gave us the Works Progress Administration (WPA) that had the United States federal government investing in cultural production geared at employing artists (and/or distracting them from revolutionary activities) while re-paving the symbolic superstructure of a country that, compared to Europe, had yet to enter the 20th century (which, as most historians will tell you, the U.S. succeeded in owning). Rennie could have made this argument, as a concerned citizen, but chose not to. Why he chose not to speaks more to what he does not want than what he does.
Rather than dwell on what Rennie does not want, let's look instead at the rest of his comment, particularly with respect to "new models." One such model (the one he put forth in that same Globe article) is for "8 to 10" smaller VAGs. While this proposal has been thoroughly critiqued, what Rennie appears to be getting at is not so much smaller galleries but a de-emphasis on a single monolithic structure. Given the way contemporary art is changing, with much of it housed online and appearing in non-traditional public and private spaces, might the monolithic public gallery (like the monolithic public library) be headed down the same path as those increasingly defunct big box book and record stores? (An unintended irony of Moshe Safdie's Main Branch of the Vancouver Public Library is that it is based on a ruin.)
Yes, there will always be public and private galleries (museums?) to display object-based work; but if in this never-ending "new economy" the growth of these structures is prohibitive, as Rennie suggests, then the contemporary art of the "new economy" can only reflect that -- if art, as we know it, will exist at all.
Posted by Michael Turner at 5:42 PM