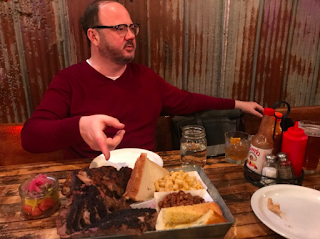 Yesterday morning I received an email from a friend who told me that another friend -- Dean Allen -- has gone to spirit. In writing this, the Dean I knew would have scoffed at the idea of having "gone" anywhere, let alone "to spirit," but that was part of his charm: not just the verbal and written forms his disagreements took, but the facial dance in advance of them.

Dean designed a couple of my earliest books: Kingsway (1995) and American Whiskey Bar (1997). As a designer, he made these books more than they were after I had signed off on them, and made a point of telling me so -- lovingly! Although both books were re-designed for later editions, Dean's original designs (especially Kingsway) remain my favourites.

There are already some nice remembrances of Dean online, including this one by Om Malik (the picture above is from Om's site and was taken by Matt Mullenweg). Om knew Dean after I knew Dean, who I met in Vancouver in 1986, and who I said goodbye to in the months before 9/11 when he moved to France "For good!" as he replied happily after I asked him, "For how long?"

I have more to say about my friendship with Dean, and will likely get to that over what remains of my own life. In the meantime, I would like to share a favourite (and friendlier!) piece that Dean wrote and posted on his Textism site on January 10th, 2001:

HOW TO COOK SOUP

First, you need some water. Fuse two hydrogen with one oxygen and repeat until you have enough. While the water is heating, raise some cattle. Pay a man with grim eyes to do the slaughtering, preferably while you are away. Roast the bones, then add to the water. Go away again. Come back once in awhile to skim. When the bones begin to float, lash together into booms and tow up the coast. Reduce. Keep reducing. When you think you have reduced enough, reduce some more. Raise some barley. When the broth coats the back of a spoon and light cannot escape it, you are nearly there. Pause to mop your brow as you harvest the barley. Search in vain for a cloud in the sky. Soak the barley overnight (you will need more water here), then add to the broth. When, out of the blue, you remember the first person you truly loved, the soup is ready. Serve.

Posted by Michael Turner at 1:13 PM