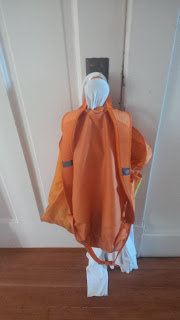 The flow at VIVO Thursday night was steady but gentle. Soft conversations with Jordan Strom, Jamie Hilder and Steven Tong, who invited me to his wedding in October. Last night's openings at the Or and Artspeak were a little busier, a little louder.

Behind the bar at the Or were Steffanie Ling and Kate Noble. Both Steffanie and Kate were in a special topics course I initiated at ECUAD a few years back. Steffanie's recent book of fiction, Nascar (2016), feels like equal parts Charles Baudelaire (Paris Spleen, 1855), Nathalie Sarraute (Tropisms, 1939) and Roland Barthes (Mythologies, 1957). I recommend it. You can find copies at Pulp Fiction. Kate is the Acting Associate Director of the Or.

The Or's new Director/Curator Denise Ryner was there, so I introduced myself and congratulated her on her appointment. Guest curator Kathleen Ritter was there, too. I had not seen Kathleen in ages, so we had a quick catch up. Kathleen is teaching at Parsons Paris. Click here and you will see a picture of Kathleen and her colleagues. Everyone looks so striking! Maybe it's the black-and-white photography. Ghosts from Bande à part (1964). That scene, or this one.

Sky Goodden was visiting from Toronto, and we spoke. I congratulated her on three years of Momus, and she appreciated that. I will throw a party for Sky when she returns in April.

This went on for some time, with lots of laughter, before "Barb" reached for her notebook to write down "Barb Choit". "My name's Michelle -- Michelle Weinstein," she said, and we talked about her Old Powerhouse project in Portland, Oregon, and I said I would look it up tomorrow.

Tiziana La Melia was there. So was Julian Hou. Lauren Marsden and her partner arrived with their pram and their tiny two month old daughter inside.

I returned my glass to Kate and headed down Hamilton to Artspeak.