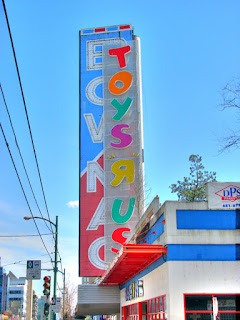 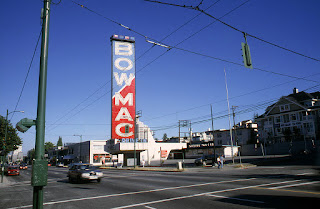 Toys "R" Us Canada has filed for bankruptcy protection in an attempt to do what everybody does these days and that's move forward.

Above are two signs. The first is the Toys "R" Us sign at the 1100-block West Broadway; the second is the Bowell-McLean car dealership sign over which the Toys "R" Us name was placed.

How did this happen?

In 1958 Bowell-McLean built what was then the largest free-standing sign in North American, illuminated or otherwise. Some loved it, some didn't, some didn't care either way. Among the "didn't"s was the band Pied Pumkin, who wrote a song about it that I can't find anywhere.

Something similar happened a few years later with the Hotel Niagara at the 900-block West Pender. Eventually the waterfall under which Ramada imposed its name was erased. 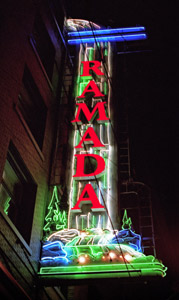 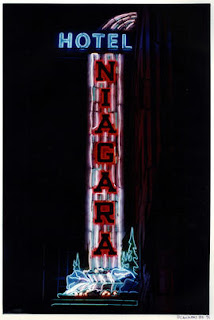 Posted by Michael Turner at 6:28 AM