The Selling of Alphonso Davies

Earlier this week it was announced on CBC radio that the Vancouver Whitecaps "sold" their star player -- seventeen-year-old Alphonso Davies -- to a German football team for 20 million dollars. 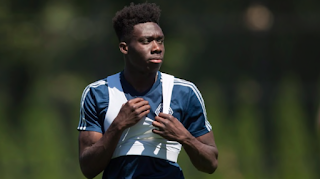 Of course the player is not literally sold, like hockey player Wayne Gretzky and his contract were sold by the WHA's Indianapolis Pacers to the Edmonton Oilers in 1978, but the rights to negotiate a contract with that player. Whether this contract means the same amount of money, or more, for Davies and his agent has yet to be announced.

Posted by Michael Turner at 9:01 AM