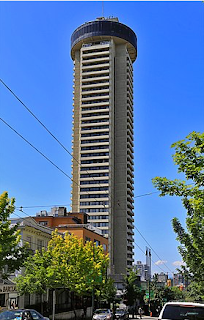 Upon its completion in 1973, the 42-storey Sheraton Landmark (later renamed the Empire Landmark) was the third tallest building in Vancouver, and its tallest hotel. Located at 1400 Robson, the Sheraton was one of two Vancouver towers topped with revolving restaurants (the other was Harbour Centre on West Hastings).

As a child I remember watching the construction of the Sheraton with my father, who lived at the western end of Nelson. A couple years ago, it was the Empire's piece by piece demolition. Last week I stopped to take in the signage announcing what will be two smaller 31- and 32-storey mixed-use towers containing 237 market units and 63 social housing units.

Lots of fanfare for the market units, yet nothing imagining life in the "social" spectrum. 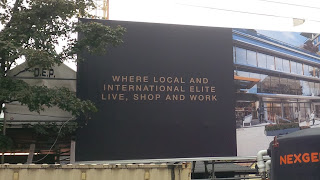