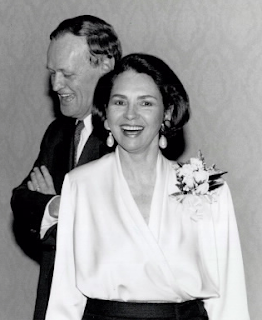 Aline Chrétien passed away last week. I never knew much about her, apart from her coming from a very large family and that she quit school in her mid-teens to look after her siblings. Also, that she thwarted a home invasion when her husband was Prime Minster of Canada, an incident that, according to her many obituaries, was her highest achievement.

Something that went unmentioned in Chrétien's obituaries was her negative feelings toward the Canadian Broadcasting Corporation, a revelation that came to light during her husband's term as Prime Minister (1993-2003), when cuts to the public broadcaster were not uncommon. I have heard it said that Chrétien resented characterizations of her husband by the broadcaster's journalists and broadcasters, in addition to cultural programming that many continue to find condescending in its disingenuous attempts at neutrality.

Talk of the CBC and its future has come up recently with the emergence of federal Conservative party leader Erin O'Toole. If elected, O'Toole has promised to end all funding to CBC Digital; cut funding to CBC TV and News Network by 50%, with the goal of fully privatizing CBC by the end of his first mandate; and maintain funding for CBC Radio and Radio-Canada. Nowhere in his platform has O'Toole said he will attempt to silence his critics by giving CBC Radio and Radio-Canada to a yet-to-be-established consortium of BIPOC and LGBTQ+ journalists, broadcasters and business managers, with the intent of dividing and conquering those whose stripe is not, like O'Toole's, "True Blue".

Posted by Michael Turner at 9:17 AM