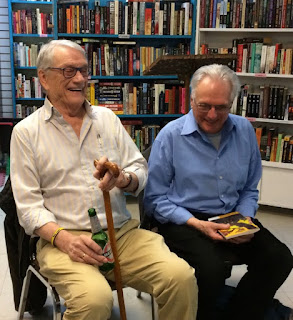 A book launch last month for George Stanley's West Broadway and George Bowering's Some End. Both published by New Star, both in the same book -- a flip-book bound by an image from a painting by Jack Shadbolt entitled Encounter (1995).

The picture up top was taken by Renee Rodin.

Stanley read first, and for a brief second it looked like this: 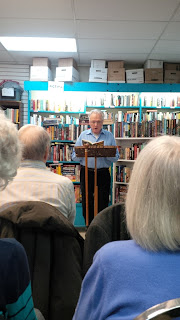 Then Bowering read, and something similar happened, except the picture I took was tilted, so I had to re-frame it, making Bowering bigger, which is true -- he is. Bigger than Stanley. But now he is way bigger than Stanley and getting in the way of the event! 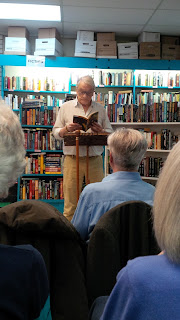 But this event -- it was something. Renee to my left, Jill to my right, with Fred and Pauline in front. Peter and Meredith were there. Daphne. Maria was there, not Gladys. (No one's been called Gladys for how many years now?) Scott was there, and as I watched him listen I thought of that picture of him and Stanley in San Francisco, 1970, when Scott was twenty.

Stanley brought names, but his entered the room quietly, like he does.

Rolf was there, our host. Jean was there. Someone said Jean was the youngest person in the room, and Jean protested, "No way, Michael's younger than I am. Not by much -- but he is younger!"

There were other younger people there, much younger than me, but I didn't know them. Grad students, I think, which warmed me, made me look at them in ways motivated by a desire to see these Georges read into the next century.

Will these youngers encourage that? I kept looking at them, imagining them lecturing to us, telling us something we are excited to know, asking us how our essays are coming, and no, none of these poems will be on the test.

Posted by Michael Turner at 6:41 AM