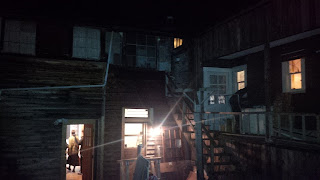 Back in 1965, 18-year-old Gregg Simpson rented a 30' x 60' storefront at Bayswater and 4th Avenue in Kitsilano. Although intended as a studio for the young artist/musician to paint and rehearse with his band the Al Neil Trio (Neil on piano, Richard Anstey on bass, Simpson on drums), the space quickly became a hub for literary readings, dance performances and related multimedia activities.

As interest in the space grew, so too did the need for a larger venue. Soon enough the organizational energy behind what was now called the Sound Gallery begat Motion Studio, which in turn begat the Trip's Festival in 1966, and from there helped to shape what became known as Intermedia (1967-1973).

Sound Gallery was on my mind last night as we parked in front of its former location to attend an opening across the street at Tobin Gibson's Unit 17, which opened at its Kitsilano address (from its Main Street cubbyhole) this past summer. Entitled SOOT, the exhibition features work by Alexandra Bischoff, Gabi Dao, Julian Hou, Scott Kemp, Anne Low, Tiziana La Melia and Nicole Ondre.

Behind the exhibition is a small administration space/kitchen sink. Adjacent to that, an artist studio. Behind that, a door that leads to a long and large, southern-exposed backyard (pictured above) that Gibson has plans to turn into what he is calling Les Jardins. As a gardener partial to night gardens (pictured below is Unit 17's budding magnolia), I am excited about this space. Hopefully the neighbours will be too. 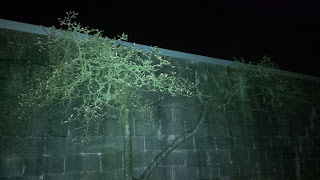