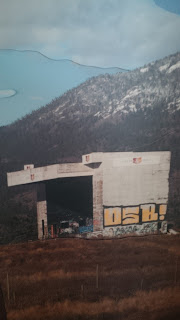 While at Lake Country (Winfield) last Friday I visited the Lake Country Art Gallery to speak with curator Wanda Lock and artist Scott August, who were installing.

Scott's exhibition, entitled Furbish: Remnant Themes of Post-Amusement, is a re-imaginging of the work of Okanagan-based Peter Soehn, who for many years animated the region, as well as parts of the Lower Mainland and Alberta, with eye-catching billboards and moulded sculptures, like those commissioned by the former Kelowna Zoo and Old Macdonald's Farm. 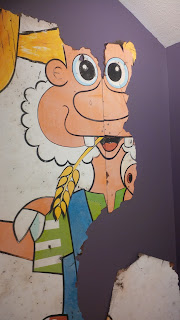 The picture atop this post is an inset from a larger montage Scott created for Furbish. In addition to the concrete concert stage that once stood at the centre of this whispering field are billboards, not just those managed by media giants like the Pattison Group, but by local companies as well. 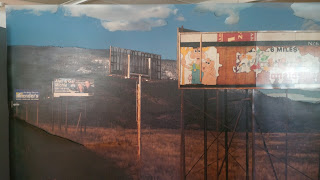 I had hoped to have more to say about this former concert stage (information I thought I might gather from my visit to the gallery this afternoon), but when I arrived the door was locked, and it was only then that it occurred to me that the person in charge of sitting the gallery was likely delayed due to the wildfire that broke out last night at the other side of Lake Country (Okanagan Centre) -- which sadly turned out to be the case. 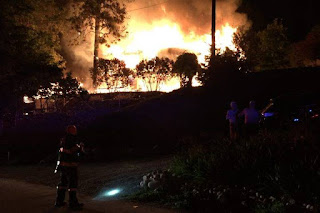 In a couple of weeks I should have a more comprehensive piece written on Scott's exhibition. In the meantime, thank you to Scott and Wanda for allowing me to photograph the exhibition in the midst of its installation.
Posted by Michael Turner at 2:52 PM