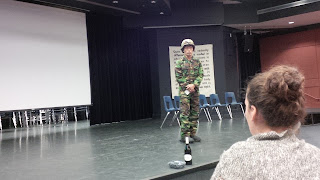 Yesterday's roundtable panel (on the body, sovereignty and territory) was the second in the Summer Indigenous Intensive series of weekly panels. Perhaps because it followed an electric first panel (and because the second martini, no matter how hard you want it, is never quite as perfect as the first), this panel did not quite achieve the overtone of its predecessor.

Although every presentation had its moments (Carmen's reminders of the blindered language that attends discussions of sight and sightlessness, Adrian's embodiment of the room by circling it, and David's chameleon military uniform and his attention to space-taking moments in history), the two that remain closest to me -- that walk closest to me -- are Lori and Michelle's.

I appreciate what Lori said about rocks. Watching her grandmother crush chokeberries with them and watching them piled up beside farmers fields, where they were once in the way of another kind of food production. Listening to Lori had me searching the room for Tania, who wrote beautifully on rocks (stones) in Presentation House Gallery's Nanitch catalogue earlier this year.

Lori also spoke of a work she made in response to Elliot Silverstein's controversial film A Man Called Horse (1970), where, apropos of her ongoing critique of the imposed upon indigenous body, she "unpacked" a handsome cracker, taught him how to crush berries, then allowed herself (her "princess" self, her "squaw" self, or a little torn from each of her selves?) to fall in love with him.

For her part, Michelle's presentation threaded traditional Mali, Caribbean and U.S. American folk and popular songs within a discussion of her own passage as a scholar interested in body artists like Suzy Lake, Cindy Sherman and Adrian Piper. She even busted a few moves here and there -- enough to wade our bodies deeper into that which she set in motion so quietly, so fluidly, so skillfully.
Posted by Michael Turner at 4:05 PM