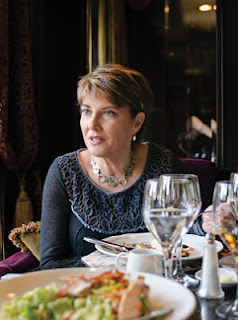 Another reason why VAG Director Kathleen Bartels has my sympathies concerns a dinner held at Bob Rennie's Wing Sang Building in early September. The story I am about to tell has been stitched together from a number of sources, all of them similar enough to make it less an instance of gossip than a crime beat necessity.

The dinner in question was a rooftop "dinner-for-twelve" Rennie had donated to a Vancouver Symphony Orchestra auction earlier in the year. The winning bidder was VAG board member Eric Savics, a principal at a brokerage firm (Haywood) that my late father once worked at in the 1980s. Savics's invitees included Equinox Gallery's Andy Sylvester, his partner VAG Chief Curator/Associate Director Daina Augaitis, VAG board member and mining/movie mogul Frank Giustra, VAG board member Michael Audain and his wife Yoshi Karasawa, and, after asking her three times, a reluctant Kathleen Bartels, who was brought to the event by the VAG's other Associate Director, Paul Larocque. Apparently Savics had also invited Rennie, but as Rennie and Carey Fouks had planned to spend the evening on Jimmy Pattison's yacht, Rennie declined.

It was at some point during the dinner that a Wing Sang security guard identified Bartels on one of the building's surveillance screens, leading him to call a) Rennie Collection Director Wendy Chang, who then called Fouks or b) Fouks directly. Whatever the case, the call was received just as Fouks and Rennie were disembarking, and Fouks's response was to fall to his knees, then leap to his feet, throw his phone to the ground and, amidst a bouquet of expletives, announce to Rennie that Bartels had breached the perimeter. Enraged, Rennie told Fouks that he would handle it and jumped in his car, leaving Fouks to follow.

Rennie entered the lobby of Wing Sang just as the diners had started into their desserts (Audain, Karasawa and Giustra had left by then), whereupon he let loose with an expletive-laden scream that could be heard all the way to the roof. Most versions of the story have it that Bartels was in the bathroom at the time, though one version states that, upon hearing Rennie's voice, Bartels ran to the bathroom to hide. Either way, Rennie ascended the building (by stairs or by elevator, I am not sure) and informed the diners exactly what he thought of Bartels. At this point it is alleged that Laroque, fearful of Bartels's safety, ran downstairs to the bathroom hoping to find the VAG director and remove her from the premises, pressing elevators buttons along the way in the event that she was on her way back to the table.

At this point Fouks entered the building and, while making his way to the roof, came upon an elevator at the moment its doors were opening (how Larocque and Fouks did not pass each other on the way is unclear). Inside the elevator was Bartels, whom Fouks proceeded to lay into, calling her a string of unrepeatable names as she brushed past him and ran upstairs, with Fouks in pursuit. Upon her return Rennie then redirected his invective at Bartels, moving ever closer, to the point where Sylvester stepped between them, at which point Bartels and the rest of Savics's party were ushered out of the building. Another version has it that it was Rennie who confronted Bartels outside the washroom and, upon her return to the table, Fouks stormed in and took his expletives to the next level, after which Larocque escorted Bartels to a nearby apartment, where she could collect herself before returning home to her family.

A common response to this story is indicative of the bad feeling many have towards Bartels; namely, that she should not have gone to this dinner in the first place, given Rennie's antipathy towards her. But I disagree -- she went to this dinner at the repeated urging of one of her board members, what I interpret as an act of loyalty, or support. Another way to look at this is to question the logic of such a statement, because to say that Bartels should not have gone to Wing Sang that night is tantamount to saying that rape is justified when women put themselves in situations where rape is likely. I refuse to blame the victim here, because what Rennie and Fouks threw at Bartels breached far more than Bartels's breach of their perimeter. What these two did is reprehensible. Poe's "Masque of Red Death" -- but inverted.
Posted by Michael Turner at 10:30 AM